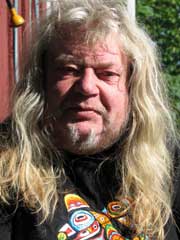 Triztan G. Vindtorn (31.07.1942-04.03.2009) studied textile technique in England and Sweden. Later he worked as a light technician at the Norwegian Theatre in Oslo and at Oslo New Theatre for 13 years. He published his first book of poetry in 1970, and most recently his 29th book. He has been awarded many important literary prizes and grants. Among them are: the Norwegian Authors’ Union’s Great Travel Grant, the Norwegian State Work Grant, the Oslo City Grant, the Brake Prize awarded by Drammen Library, the Cultural Grant of the Municipality of Drammen, the most prestigious Norwegian literary grant – the Aschehoug Prize – awarded by the Norwegian Union of Literary Critics, the Dobloug Prize – awarded by the Swedish Academy, and the Critics’ Kiss awarded by the Critics’ Journal. He has also been bestowed knighthood by Drakabygget in 2005. Many of his poems have been translated into 20 languages and published in anthologies, literary magazines, and newspapers. Since 1983 he has received the Norwegian State Guarantee Yearly Income for Artists.

Под виножитото на ноќта / Under nattens regnbue / Underneath the Rainbow of the Night
December 8, 2012
Grimaces of Language
April 29, 2009