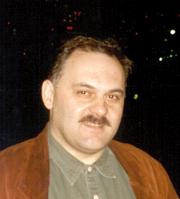 Play and screenplay writer, a media theoretician, a theater and film critic, a prose writer and an essayist. Osmanli has written the first Macedonian books dedicated to the theory of the Seventh (Film and Politics, 1981) and the Ninth art (Comics – a Scripture of Human Image, 1987), as well of the following books: The Missing Media (essays on civil urbanity, 1992), The Butterfly of Childhood, (short nostalgic stories, 1993), Violet Lights and Shades (short stories on solitude, 2001) and Listening in a Deaf Time (political essays, 1994). He wrote the screenplay for the feature film Angels of the Dumps (1995). His screenplay writer’s activity began in 1976 with the feature screenplay Men Without Address, and continued with his feature-length screenplay The Stars of ’42, (1984), Skopje Dreams, (1987). His theater works include: the satirical comedy The Salon Booms (1987), the multimedia play Memento for a City, the chamber play Two in Eden (1995) that had its American premiere at John W. Gaines Theater in Newport News, Virginia, and was entered in the Blue Ridge Theater Festival in Richmond, USA, the play Fireflies in the Night (1997), the play Techno Star (2000) and the Christmas mystery The New King (2001).
In 2008, Cultural Institution Blesok published Characters from Meanwhile, collection of three scripts: “Angels of the Dumps” (filmed in 1995), TV film “Headlongs” (filmed in 2006), and feature-documentary and experimental film “On Occasion of Manaki” (filmed in 2007). In 2009, at the same publishing house, he published his first novel The Twenty-first.
Tomislav Osmanli is an author of a variety of texts published in numerous film and other periodicals in the former Yugoslavia and in Macedonia. His film critic activity has lasted for more than twenty years. Won a number of art, professional and public awards. Today he works as Chief of the Arts program for the independent Telma TV.