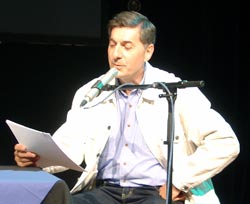 Tom Petsinis is a Melbourne-based poet, playwright and novelist. He was born in Aegean Macedonia, Greece, in 1953 and emigrated to Australia as a child. The Australia Council has awarded him a Writers’ Fellowship and a residency at the B.R. Whiting Library in Rome. He has lectured in mathematics and creative writing at various tertiary institutions, and is presently teaching at Victoria University, where he recently completed his PhD. He is married with two daughters.
His first play The Drought won the Victorian Arts Centre’s Wal Cherry Play of the Year for 1993 and was short-listed for the 1995 Victorian Premier’s Literary Award. A subsequent novel The French Mathematician was short-listed for the South Australian Festival Literary Awards in 1998 and the N.S.W. Premier’s Award for fiction in 1999. He has published three novels, a collection of short stories, five books of poetry and four plays. He has participated in national and international literary festivals, including Struga, Rotterdam, Maastricht and Vilenica. His work has been translated into a number of languages.