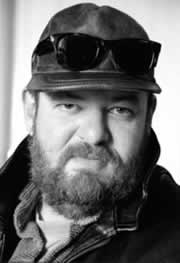 Szilárd Podmaniczky (1963) lives in Segedin where he graduated in mathematics and physics. Since 1993 he has had nine books published and since 1996 he has been a free-lance writer. He has received several significant Hungarian literary awards. He writes prose (A Leopard Takes Leave With Both Hands, a novel, 2001), poems (…hydraulic bride…, 2000), prose for children. In 1999 his book, Pictures Out Of The Cave Mouth (minimal prose), was the book of the year in Hungary. In 2004 he published An Out-Of-Time Seven-Meter Penalty Kick, his novel in three parts. He writes feuilletons for Hungarian magazines, newspapers, and the Segedin local daily. He is also a dramaturgist, a screenplay writer, and he does photography and drawing as well. His works have been translated into English, German, Slovak and Bolga¬rian, and his novel A Leopard Takes Leave With Both Hands is just being translated into German.