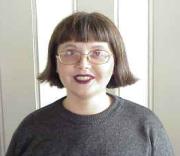 Suzana Milevska is an art theorist and curator. She was born in 1961, Bitola (Macedonia). In 1984 she received her BA from the Art Department of “St. Cyrill and Methodius” University in Skopje and in 1993/1994 she studied at Central Europea University in Prague Philosophy and History of Art and Architecture.

Currently she is a PhD student at Goldsmiths College. As a curator and researcher she received the Research Support Scheme Grant (1997), an ArtsLink Grant (1999) for the residency program at the School of the Art Institute of Chicago and the Curatorial Research Grant of the P.Getty Foundation for 2001.

She publishes critical and theoretical essays since the late eighties in many art and theoretical magazines, such as Kinopis, Kulturen zhivot, Golemoto staklo, Siksi, Index, Nu, Springerin, Flash Art, Afterimage, Curare, Blesok, and she participated in several international conferences and symposia.