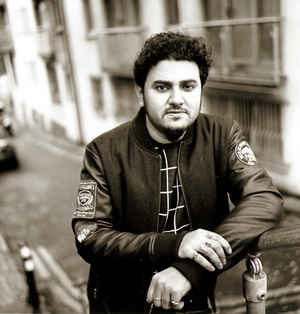 Sonnet Mondal (Kolkata, India) is the author four books of poetry, and editor-in-chief of The Enchanting Verses Literary Review (www.theenchantingverses.org). His most recent book, Ink and Line, was co-authored with Sukrita Paul Kumar. He has read, and represented India, at festivals in Macedonia; Cork, Ireland; Istanbul, Turkey; Granada, Nicaragua; and Slovakia. His poetry has been translated into Hindi, Italian, Slovenian, Slovakian, Turkish, Macedonian, Bengali and Arabic, and published across Asia, Europe, Australia and North America. He was listed as among India’s celebrated authors in Forbes magazine in 2014 & 2015 and was listed among famous five Bengali youths in the India Today magazine.

His recent works have appeared in the Kyoto journal, Irish Examiner, the World Literature Today, the Mcneese Review, Palestine Chronicle, Drunken Boat, Indian Literature, Asia Literary Review and Two Thirds North. A guest editor of Poetry at Sangam in 2017, Sonnet is the curator of the Odisha Arts & Literature Festival, India.

Winner of the 2016 Gayatri Gamarsh Memorial award for literary excellence, Mondal was one of the authors of the ‘Silk Routes’ project of the IWP, University of Iowa, from 2014 to 2016. Sonnet’s poems in Slovenian translation by Barbara Pogacnik, were aired at the Literary Nokturno program of the Public Radio & Television of Slovenia in 2016 and was included in Sahitya Akademi’s Modern English Poetry by Younger Indians edited by Sudeep Sen.

Mondal led an Indian cultural delegation to the Ars Poetica International Festival, Slovakia in November 2016 and read at the 2017 edition of the Cork International Poetry festival, Ireland. A Writer in Residence at Sierra Neveda College’s MFA in Creative Writing program, Mondal represented India at the 10th year anniversary edition of the International Istanbul Poetry and Literature Festival.