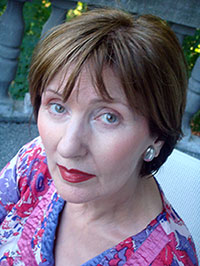 Sonja Manojlović (b. March 15, 1948, Zagreb) earned her degree in philosophy and comparative literature from the Faculty of Philosophy in Zagreb. Her poems were included in various anthologies and translated in a dozen languages; for her poetry she has received many awards.
She lives in Zagreb, Croatia.
She has published eighteen books, including selected poems translated and published in Polish (2008) and in Romanian (2009).