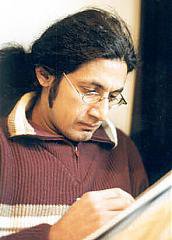 Rodaan Al Galidi is a writer of Iraqi descent. As his native country didn’t register births when he was born, he does not know his birth date. He studied as an engineer in Iraq before fleeing to escape military service, arriving in the Netherlands in 1998. However, his request for asylum was rejected, and since he was not allowed to follow the official courses of Dutch language, he taught himself the language and started writing. He is now considered to be a Dutch writer and receives stipends from Dutch as well as Flemish institutes.
In 2007, Rodaan was one of the people to benefit from the general pardon given by the Dutch parliament to asylum seekers arriving before 2001, and he still lives in the country.
He writes poetry and prose. In 2010 he won the European Union Prize for Literature for his novel The Autist and the Carrier-Pigeon, which has also been translated in Macedonian.