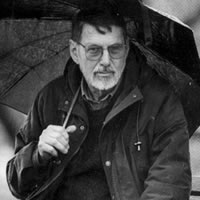 Robert Creeley was born in Arlington, Massachusetts, on May 21, 1926. He attended Harvard University from 1943 to 1946, taking time out from 1944 to 1945 to work for the American Field Service in Burma and India. In 1946 he published his first poem, in the Harvard magazine Wake. In 1949 he began corresponding with William Carlos Williams and Ezra Pound. The following year he became acquainted with the poet Charles Olson. In 1954, as rector of Black Mountain College (an experimental arts college in North Carolina), Olson invited Creeley to join the faculty and to edit the Black Mountain Review. In 1960 Creeley received a Master’s Degree from the University of New Mexico, Albuquerque. Through the Black Mountain Review and his own critical writings, Creeley helped to define an emerging counter-tradition to the literary establishment–a postwar poetry originating with Pound, Williams, and Zukofsky and expanding through the lives and works of Olson, Robert Duncan, Allen Ginsberg, Denise Levertov, Edward Dorn, and others.
Robert Creeley has published more than sixty books of poetry in the United States and abroad, including If I Were Writing This (New Directions, 2003), Just in Time: Poems 1984-1994 (2001), Life & Death (1998), Echoes (1994), Selected Poems 1945-1990 (1991), Memory Gardens (1986), Mirrors (1983), The Collected Poems of Robert Creeley, 1945-1975 (1982), Later (1979), The Finger (1968), and For Love: Poems 1950-1960 (1962). He has also published The Island (novel, 1963), The Gold Diggers and Other Stories (1965), and more than a dozen books of prose, essays, and interviews. He has also edited such books as Charles Olson’s Selected Poems (1993), The Essential Burns (1989), and Whitman: Selected Poems (1973). His honors include the Lannan Lifetime Achievement Award, the Frost Medal, the Shelley Memorial Award, a National Endowment for the Arts grant, a Rockefeller Foundation grant, and fellowships from the Guggenheim Foundation. He served as New York State Poet Laureate from 1989 to 1991 and since 1989 he has been Samuel P. Capen Professor of poetry and humanities at the State University of New York, Buffalo. He was elected a Chancellor of the Academy of American Poets in 1999.
Robert Creeley died March 30, 2005. He was 78.