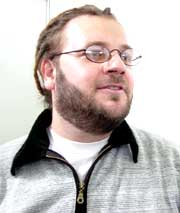 Robert Alagjozovski, born, 27.10.1973., Strumica, SFRY. Following the general socio-economic and political-culturological trend in his country, he has opened intelectual drugstore (unregistrated), with non-stop working hours. Until now his brand has produced this:

For his succesful work and conscious contribution he has recieved the following rewards and status symbols:
– editor for culture in”Studentski zbor” (2000-2002);
– editor for theatre in “Blesok|Shine” (2002-2005);
– reward on the poetry festival “Potkozjacki sredbi”, Kumanovo, 1994;
– second prise for short story at the traditional competition of “Studentski Zbor” (1997);
– participation in Katica Kjulavkova anthology of short stories “Caesarian cut”;
– presidency in FSM (Youth hostel Asossiation of Macedonia);
presidency in the League for Democracy (0.4% popularity);
– presidency in the Board of Transeuropeennes-Makedonija (in a process of closing).

A Spectral View over the Ideological Aspects of O. Stone's and S. Lee's Work
February 1, 2001