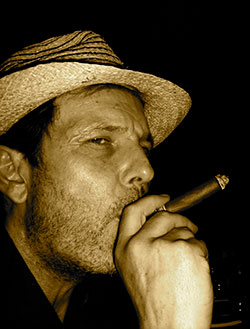 Richard Gwyn (b. 1956) is a Welsh poet, novelist and translator. He studied anthropology at the London School of Economics, and worked in a variety of manual jobs in London before setting out for a decade of travel with long stays in Greece and Spain. The 1980s ended in a period of vagrancy documented in his award-winning memoir, The Vagabond’s Breakfast (2011). He has a PhD in Linguistics and currently directs the Creative Writing programme at Cardiff University. Gwyn is the author of several collections of poetry and prose poetry, the latest of which is Sad Giraffe Café (2010). His first novel, The Colour of a Dog Running Away (2005) received international acclaim and has been widely translated. His poetry also has been translated into many languages, including Spanish, Russian, Greek and Turkish. He has translated poetry and fiction from several Latin American writers, most recently A Complicated Mammal, the selected poems of Joaquín O. Giannuzzi (2012), and he reviews Latin American and Spanish fiction for The Independent. His website can be found at www.richardgwyn.com. He is also the author of Ricardo Blanco’s Blog: www.richardgwyn.wordpress.com