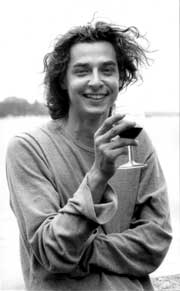 Péter Zilahy was born in 1970 in Budapest. He is a many sided author, whose prose and poetry are widely translated and who has often used photography, interactive media and performance art in his work. His book of poems Statue Under a White Sheet Ready to Jump was published in 1993. His dictionary novel The Last Window Giraffe was published in 1998 and has since been translated into 11 languages. He performed with his multimedia CD-ROM in twenty countries all over the world. He was a visiting scholar at New York University in 2001. In 2002 Ludwig Museum Budapest made an exhibition of his selected works. You can find more information at www.zilahy.net