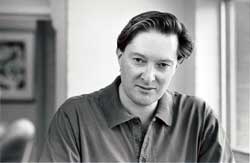 The Australian poet and writer Peter Nicholson was born in 1950 in Waverley, New South Wales, growing up in the Sydney suburbs of Woollahra and Epping. He was educated at Armidale Teachers College and Macquarie University from which he graduated in 1978 with an honours thesis concerning the poetry of Wallace Stevens. Nicholson published A Temporary Grace in 1991. It includes the collections At the Water’s Edge and Views to a Bridge. Also included is the short fiction Fast Forward, styled a ‘poetic narrative’ and set in Sydney’s urban milieu. Such Sweet Thunder was published in 1994 and includes Shadow of a Doubt, Prometheus and S.S. Snakebite. A third volume, A Dwelling Place, was published in 1997. Speech to a Mountain and New Affection, New Noise are separated by Notebook, a series of commentaries, opinions and questions about aesthetics. There is an introduction to his work at peternicholson.com.au