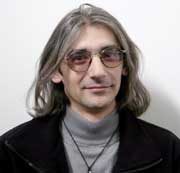 Born in Bitola, R.Macedonia, at 10th of October 1968.
B.A. at Faculty of Philology – Skopje, at the Cathedra of Comparative Literature. Mphil at the same Cathedra.
He works as a filmologist in the Cinematheque of Macedonia.
Books:
The Frontier – Kultura, 1995. (SF novellas and stories)
Psychotopia – Magor, 2001. (novel)
He is publishing fiction, literature theory and essays at literature periodicals and others magazines and in various media. He is also engaged as an editor in the magazine for film history and theory KINOPIS, also.
e-mail: petar.volnarovski@uklo.edu.mk