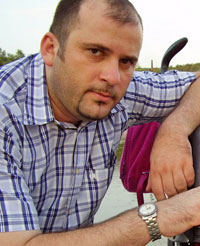 Pavle Goranović (b. 1973, Nikšić, Monte Negro), graduated Philosophy at the Faculty of Philosophy. He writes poetry, prose, and literary reviews. He is an editor of the magazine for literature, culture and social issues ARS.

Published books of poetry: Ornamentation of the Night (1994), Reading of Silence (1997), A Book of Mirages (2002), What the Books Smells Like (selected poetry, Zagreb, 2009) and Vermillion (2009). He prepared numerous selections from the contemporary Montenegrin literature in foreign magazines, and literary-history monograph Tin Ujević and Monte Negro (2008).

His literary works have been translated into variety of languages (English, Italian, French, Slovenian, Slovakian, Macedonian, Polish, Swedish, Albanian, Hebrew…). He was included in numerous anthologies of Montenegrin and ex-Yugoslavian poetry and short stories, and in the anthology “New European Poets” (Graywolf Press, USA, 2008).

Books published abroad: A Book of Mirages (Apokalipsa, Ljubljana, 2006), and selected poetry The Angels of Equanimity Are Approaching (Blesok, Skopje, 2009)

He won the Risto Ratković award for the best book of poetry in 2009.