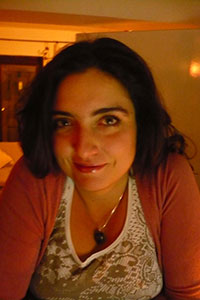 Nikolina Stojanova, after finishing secondary school in 2002 at “Josip Broz Tito”, linguistic department, has inscribed at the Faculty of philology “Blaže Koneski” at the department of French language and literature. In the second year of her studies she was inscribed at the department of general and comparative literature, as a “b” option. After obtaining her diploma, she pursued her studies in 2007 at the faculty “La Nouvelle Sorbonne Paris 3” at the department of general and comparative literature, in the frames of the university Sorbonne, in Paris, France. At the moment she is inscribed at doctoral studies at the department of general and comparative literature in Skopje and she is in the process of making her PhD thesis on the subject: “the narrative structure in modernism and postmodernism through several examples of painting and literature”.
She works as a lector of French language at the University American College Skopje and as certified court translator from French and English to Macedonian and vice-versa. She was a part of the editorial team of two editions of short stories (“American fairytales” by Frank Baum and “Collection of short stories” – both being electronic editions published by the University American College Skopje). As a court translator she has been engaged by the translator’s bureau “Letra prevodi”. Since 2011 she has been engaged by the Broadcasting Council of the Republic of Macedonia as a translator from Macedonian to English and vice-versa.
She has published two scientific works: “The Tangible Points between Literature and Painting” that appeared in Културен живот in 2009 and ” The Subject Treatment in Julio Cortázar’s Hopscotch” appeared in Книжевен Контекст in 2012.
Her presence has been noticed on a considerable number of seminars, conferences and summer schools. Despite these activities, she writes actively in two monthly magazines.