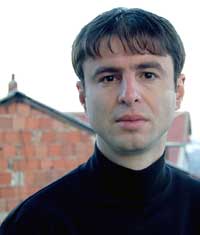 Nikola Madžirov was born on 27 May 1973 in Strumica (Macedonia). He has published poetry, essays and translations. For his book of poetry Locked in the city (1999) he received the Studentski Zbor award for the best debut book, while for his Somewhere nowhere (1999) the Aco Karamanov award. In 2004 he published the collection of poems In the city, somewhere. For the poetry of his latest book Relocated stone (2007) he received the Hubert Burda award, which is presented to authors born in Central and Eastern Europe. His poetry has been translated into eighteen languages and published in collections and anthologies in Macedonia and abroad. He is the Macedonian coordinator of the international poetry net Lyrikline. Based on his poetry, two short films have been made in Sofia (Bulgaria) and Zagreb (Croatia). He has participated at several international poetry festivals (Poetry Spring; Struga Poetry Evenings; Vilenica; Medana), and has received several international awards and scholarships (KultuKontakt; Internationales Haus der Autoren Graz; LiteraturHause NÖ). He lives and works in Macedonia as an editor, author and translator.