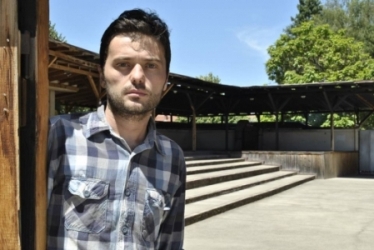 Nenad Joldeski was born in 1986 in Struga. He graduated from the state Faculty of Economy, and obtained his MA from the Department for General and Comparative Literature at the state Faculty of Philology on “Intertextual Irony in the Modern and Postmodern Short Stories”.
He is the author of the first awarded book at the competition THE NEW ONES (2009, “The Silence of Enhalon”, a collection of short stories written in Struga dialect and slang. His second collection of short stories is entitled “Everybody with His Own Lake”. He is the editor of short story collection “Nicolay (fiction.water.truth)”. The book contains six short stories dedicated to doctor Nikola Nezlobinski and his wife Sofia Nezlobinska.
Joldeski is one of the founders of INKA (Initiative for Independent Cultural Activism), established in 2013 in Struga and the festival for processing culture DRIMON.
Joldeski is included in several anthologies of young poetry and prose, as well as in some Balkan magazines. His poetry has not been published yet, but it has been performed at the festivals BOSH, UFO, DRIMON.