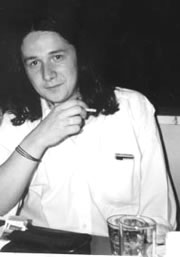 Muharem Bazdulj was born in 1977 in Travnik (Bosnia and Herzegovina). He has published three collections of short stories: One Like a Song, 1999, Another Book (Druga knjiga), 2000, The Travnik Trinity (Travniška trojica), 2002; and a novel The Concert (Koncert), 2003. He got the Soros Foundation-Open Society of Bosnia and Herzegovina award for Another Book as the best collection of short stories. Since 1996 he writes for the Sarajevo weekly BH Dani, and at times contributes to various newspapers in the former Yugoslav areas (Feral Tribune in Split, Zarez in Zagreb, Vreme in Belgrade, etc.).