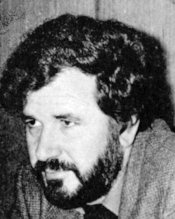 novelist, short story writer, playwright, essayist. Born 19th March 1943 in Strumica. Completed primary and secondary education in his native town. Graduated from the Faculty of Philology in Belgrade, department of General literature and Theory of Literature. Upon graduation he continued to live in Belgrade. Works in the City Library in Belgrade.
Author of the following books of short stories: Strange meeting (Belgrade, 1970), Kill the talkative dog (Belgrade, 1973), Clouds over the weed (Skopje, 1974), The smell of the earth (Skopje, 1984). Short prose works: The edge of the world (Skopje, 1990). Escape and the rebirth of the icon-painter, The tree of Narayana (Skopje, 1998). Novels: The tower on the hill (Skopje, 1981), The home of Aleksandar (Skopje, 1992), Towards the other land (Skopje, 1993). Author of numerous plays staged in theatres and published in separate books.
Won the “Racinovo priznanie” literary prize.
Member of Macedonian Academy of Arts and Science.