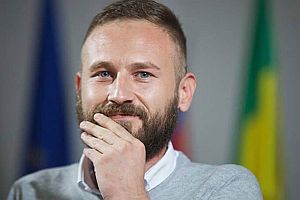 Mitko Apostolov was born on 1 August 1987 in Tetovo. He graduated from the Faculty of Mechanical Engineering in Skopje. He started to write poetry and short prose on blog.mk. His poems and short stories have been published in “Akt” and “Civiluk” magazines. In 2016, he participated at the 15th International Literary Meeting in Velenje, Slovenia, where he was published in the Slovenian language anthology “Festival of the Anthology of Original and Translated European Poetry of the 21st Century”.
He has been included in the 2015 e-collection of the global poetry event “100 Thousand Poets for Change”, as well as in the almanac of the international festival “Literary Sparkles” from Gostivar in 2016. He has participated in a number of poetry readings, such as “Astral Projections”. He lives and works in Skopje.