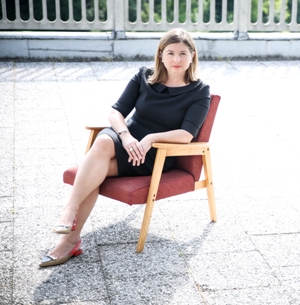 Mirana Likar Bajželj (1961) studied at Faculty of Arts in Ljubljana and graduated from Slovenian language and Literature. She started writing relatively late.
She has received numerous awards for her short-story writing. Her first award came in 2006 in the short story competition of Ona, the leading Slovenian women’s magazine. Another award followed in 2007 at the Festival of young literature Urška.
Her first short story collection “Sobotne zgodbe” (Saturday Tales) was published in 2009. The collection was nominated for Fabula, the prestigious Slovenian award for short story, as well as for the Debut fiction prize of the Ljubljana Book Fair.
In 2010 she won the jury as well as the readership award of the popular literary e-zine Air Beletrina. In 2012 writer and editor Aleksandar Hemon chose her story “Nadin prt” (Nada’s tablecloth) for the next year’s edition of the prestigious Best European Fiction anthology. In the same year, this and other stories were published in her second short story collection “Sedem besed” (Seven words).
She lives in Ljubljana, working as a teacher of Slovenian language and literature.