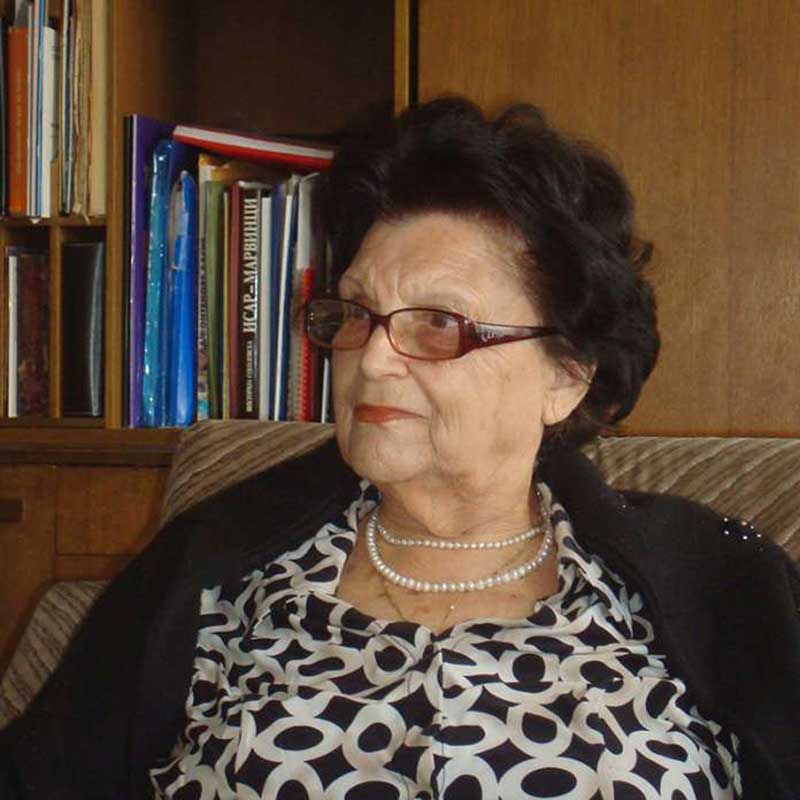 Mimoza Nestorova Tomić was born in Struga, in 1929. She graduated from the Faculty of Architecture at the Technical College in Belgrade. After graduation, she returned to Macedonia to help her family and help build her country. Shortly after her arrival in 1953, she began working at the Faculty of Architecture as an assistant at the Department of Housing, where she remained for 12 years. Afterwards, in 1965 she was employed at the Institute of Urban Planning of the City of Skopje, where she worked until her retirement. Immediately after the Skopje earthquake in 1963, the Institute of Urban Planning of the City of Skopje, with a circular letter, requested professional assistance from all design companies and from the Faculty of Architecture. It was then that Mimoza Tomić joined the work teams of the Institute of Urban Planning, where needed. The entire expert team was tasked with reviewing existing urban planning documentation so that when United Nations teams arrived, they could begin work immediately. She was on a study visit to the University of Berkeley in 1964, for 3 months, together with her husband who was beneficiary of the Ford Foundation, and she has also participated in the work of the Department of Sociology of Urban Planning, followed by a one-month stay in London and Rotterdam. She continued her work at the Institute of Urban Planning, where United Nations teams have already been formed. She was involved in the socio-urban team of POL Service, the UN team from Poland. Later on, she became the leader of the Macedonian team. Through the connection of this issue with the study of housing and traffic and the general urban plan, she was included in the main team for preparation of the General Urban Plan of Skopje, which was completed in 1965. Sje participates in the design of the western industrial zone, together with POL Service, and then with the team from the Institute of Urban Planning in the preparation of the detailed urban plan and revitalization of the Skopje Old Bazaar. In the following years, until 1968, she prepared the project for reconstruction of Suli An which was completely damaged, of the complex of craft shops, the project for revitalization of the Čifte Amam complex which was not carried out, and in 1970 she designed the catering facility Menada. In 1977 she prepared the project for architecture and interior of the “Beko” department store. In 1977-78 she made a preliminary and main project and realization for the Museums of Macedonia in the old bazaar, together with architect K. Muratovski, for which they received the “13 Noemvri” award. In 1983 she initiated the concept and realization of the interior design solution for the Museums of Macedonia in the departments of ethnology and archeology. The following year she prepared the project for the Yugoslav People’s Army residential complex in Kapištec. With a team of architects she participated in the development of the conceptual and main project for the “Business Center” of the “City Gate” complex, a competitive solution of the architect Kenzo Tange, (unrealized). In 1985 she prepared a project for reconstruction, adaptation and acoustic intervention of the Universal Hall building in Skopje, together with interior design.

From 1986 until her retirement in 1989 she was director of the Institute for Town Urban Planning an Architecture.

She has participated in many conceptual solutions and competitions in Macedonia and Yugoslavia, teamed up with her husband Lj. Tomić, or with architectural teams. Some of those works are still unrealized. She has won the first prize in a competition by invitation, together with a team of young architects, in 1985, for the project of the Republic Secretariat for Internal Affairs on Partizanska Street, which remains unrealized. She is the winner of the Academy of Architects of Macedonia national award, ANDREJA DAMJANOV, for lifetime achievement. She participated in the exhibition “Toward a Concrete Utopia: Architecture in Yugoslavia, 1948–1980” in MOMA, New York, in 2018 at the initiative of a team of architects. She is also the winner of the “Opera Omnia” award from Share Architects for 2019.