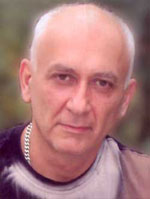 Milos Kodžoman II was born in 1952 in Skopje, Macedonia, to Vangel Kodžoman, a painter and academican, originally from Struga, and to Radmila Kodžoman (née Vučković), a professor of biology. In 1972 he completed his secondary education at the Lazar Ličenoski School of Applied Art, Skopje, in the Department of Decorative Painting. In 1974 he graduated at the St. Clement of Ohrid Teacher Training College, Skopje. In 1977 he was awarded the accolade for the best student of his generation on the occasion of the 30th jubilee of the foundation of the Skopje Teacher Training College. He became a member of the Association of Macedonian Artists (DLUM) and took an active part in a number of group exhibitions in the country and around the world. In 1973/74 he held his first solo exhibition entitled “Drugs,” which caused contrasting opinions among both the public and the critcs, and was a real scandal. His expression was largely formed in the late 1960s, the years of pop and underground events. In 1978 he exhibited hisworks in the Church of St. Clement in Ohrid together with his colleagues Slobodan Živkovski, Dragoljub Bezan, Angel Panevski-Moro and Simon Uzunovski. During the following years he occasionally made portraits in coal and pastel in various places around Yugoslavia, Italy, Grece and France. In the period 1980-1990 he worked mainly on the design of dolls, founding a workshop “PALETA” and employing accomplished artists. In 1986 he maried Lila Prokopovska, a medical doctor. Their first son, Vangel, was born that same year, and their second son, Andon, in 1994. In 1992 he signed an exclusive contract for representation with the Artec Galery, Toulouse (expert Bernard Dufaur). A cooperation followed with The House of Droueaut, Paris (experts Joël Millon and Claude Robert), one of the three leading art auction firms in the world together with Sotheby’s and Christie’s. The exibition and auction in Paris with a group of Macedonian artists greatly encouraged his return to painting. In 1993/94 he was a member of the DLUM Administration Board and in 2000 was elected its as Vice President. The film “Call” was made in 1999, focusing on Miloš Kodžoman II’s commitment in and views of art. Its author was Ana Gligorova (an Al production, duration 50 minutes). In 2002 the second documentary film on the creativity profile of Miloš Kodžoman was made titled “Waterwheel” by the author Igor Šentevski (Production MTV 2000, 40 min).
Miloš Kodžoman II’s creative profile is composed on seemingly contradictory endeavous reflecting his uncommon and atypical nature as a man and an artist.