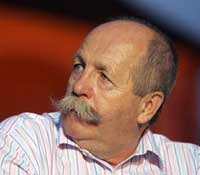 Milan Dekleva (born 1946 in Ljubljana) is a poet, essayist and novelist, who graduated in comparative literature from University of Ljubljana and works as a journalist for several papers and television. He has published fifteen books of poetry and several plays, the book of short stories and three novels as well as many children’s books and musicals. An accomplished jazz pianist and a former rugby player, Dekleva, an award-winning author, rose a particular prominence in the nineties. His poems and essays which are formally outstanding deal with the modern human condition in the absence of God.