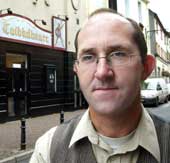 Micheál Ó Conghaile was born in Co Galway in 1962. One of Ireland’s foremost contemporary Irish-language prose writers. Also a publisher. In 1997 the Irish American Cultural Institute awarded him The Butler Literary Award. His short story Athair, (Father), from his second collection of short stories An Fear a Phléasc, (The Man Who Exploded), was awarded the Hennessy Literary Award that year, and he was also awarded the Hennessy Young Irish Writer of the Year Award. His first novel, Sna Fir, (Among Men), was published in 1999, and was shortlisted for The Irish Times Literature Awards 2001. His works have been translated into Romanian, Croatian, Albanian, German, Polish and English. Micheál’s third collection of short stories, An Fear nach nDéanann Gáire, (The Man who Never Laughs) was published in July 2003 and his first play Cúigear Chonamara staged at An Taibhdhearc in 2003 was awarded the Stewart Parker/BBC Ulster Award, an Oireachtas Award and a Writers Week/Listowel Award.