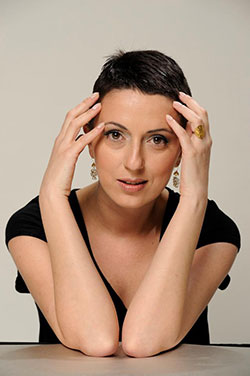 Born in 1972 in Sarajevo, where she graduated World Literature in 1993. During the war, she was involved with various humanitarian organizations, and also assisted to many journalists’ crews from around the world. Between 1997-2008 she was working at the British Embassy in Sarajevo, which helped her to complete several educational courses in marketing and public relations. Since 2008, she writes columns and articles for several magazines and for Radio Sarajevo, working for several movie-production companies and for the Sarajevo Film Festival. She lives and works in Sarajevo.

The short stories collection “Shoes for Oscar Awards” was published by Buybook in Sarajevo in 2009; the same and the following year, the book had two more editions. In 2013 it was published in Kiev, in an Ukrainian translation, and in Skopje, in Macedonian translation.