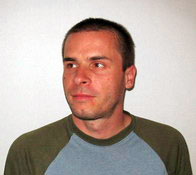 Martin Palúch (1977) – graduated in Film and Television Studies in 2001 and defended his doctoral thesis at the Academy of Performing Arts in Bratislava in 2005. Between 2002 and 2005 he worked as a research assistant and secretary of the Department of Film Studies at the Academy of Performing Arts in Bratislava. Since 2002 he has been part of the academic personnel of the Theatre and Film Cabinet of the Slovak Academy of Sciences. Also, since 2006 he has been working as a research assistant at the Faculty of Drama of the Academy of Arts in Banská Bystrica. He is carrying out research in theory and history of film, photography and mass media. Between 2003 and 2006 he was a member of the editorial board of the contemporary arts magazine Vlna (www.vlna.sk), and in 2006 he was also the coordinator of the film portion of the Ars Poetica International Poetry Festival in Bratislava.

Staging Reality in Order to Discover the Historical Paradigm
September 8, 2010