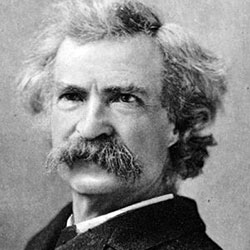 Samuel Clemens (November 30, 1835 – April 21, 1910), better known by his pen name Mark Twain, was an American author and humorist, most famous for his novels The Adventures of Tom Sawyer and its sequel, Adventures of Huckleberry Finn. Twain grew up in Hannibal, Missouri, which provided the setting for both these novels as well as for many of his short stories. After an apprenticeship with a printer, he contributed articles to the newspaper of his older brother, Orion Clemens. He later became a riverboat pilot on the Mississippi River. His wit and satire, in prose and in speech, earned praise from critics and peers. He was lauded as the “greatest American humorist of his age”, and William Faulkner called Twain “the father of American literature“.