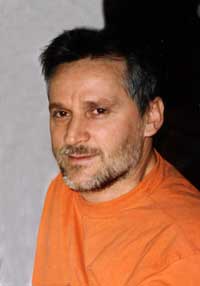 Ljuben Paunoski (1958), graduated from History of Art with Archeology at the Faculty of Philosophy in Skopje, Republic of Macedonia. Worked as journalist and editor in “Studentski zbor” magazine, and fine arts critic and editor of culture and arts at Macedonian Radio – Radio Skopje. His fine arts reviews were published in numerous cultural and art magazines. He is an author of plentiful introductions to catalogues for group and solo exhibitions of Macedonian and artists from ex SFRJ. He is an author of text for monographies Metodija Ivanovski-Mende, Matica Makedonska, Skopje, 1992; Trajče Jančevski, Zumpres, Skopje, 1996. He was Minister of Culture (1999-2000) and Minister of Defence (2000-2001) in the Government of the Republic of Macedonia, and Representative in the Parliament of the Republic of Macedonia (1998-1999).