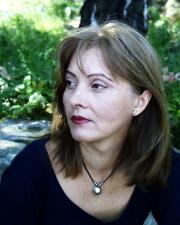 Ljiljana Jokic Kaspar was born in Novi Sad: prose writer, TV scenarist, critic. She graduated from Faculty of Philosophy, department of Theory and General Literature at the University of Novi Sad – Yugoslavia.
She has worked as a journalist for ten years and wrote for the culture column at the local newspaper, as well as at the literature specialised magazines.

Other fields of interest: contemporary world prose; problems, development and place of literature in totality regimes, and the way literature looks in transition in post – communist period.