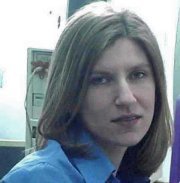 She was born on 8 May 1975 in Strumica, where she completed her primary and secondary education. She graduated from the Faculty of Philology in Skopje (1999), at the Department of English Language and Literature – translation and teaching course. She attended Ealing Tertiary College in London, where (1998) she acquired a Cambridge Certificate of Proficiency in English.
Her particular preoccupation is translation of poetry. Since April 2000 she has been translating literary texts and poetry from Macedonian and English for the Blesok|Shine Internet magazine, more significant of which is the selection of poetry by Sylvia Plath and Leonard Cohen. Here she has also published her own essay entitled, The Circle Opens – There is Life Outside. She has translated the philosophical work The great Building and other Conversations with the Unknown One by Ferid Muhikj, from Macedonian into English.
She is a member of the Presidency of Macedonian Mycological Society, in the framework of which she has participated in various home and international projects, where fungi are the main object of study. She translates scientific texts from the field of mycology, too.
Apart from studying fungi, she is also engaged in abstract painting.
Since 1999 she has been working as a translator in NATO Press Information Centre in Skopje.