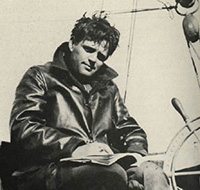 Jack London (1876-1916) was an American writer. He was one of the first fiction writers to obtain worldwide celebrity and a large fortune from his fiction alone. Some of his most famous works include The Call of the Wildand White Fang, both set in Alaska, in the Klondike Gold Rush, as well as the short stories “To Build a Fire“ and “An Odyssey of the North”. He also wrote of the South Pacific in such stories as “The Red One” and “The Chinago”, and of the San Francisco Bay area in The Sea Wolf, whose protagonist, the captain of the ship The Ghost, Wolf Larsen, is said to be one of the most memorable characters in American Literature. Martin Eden, which also has international fame, is considered to be one of his best novels. In his essay “How I Became a Socialist”, London explains his transformation from an individualist into a socialist, and after this period he strongly advocated the rights of workers and wrote several powerful works dealing with these topics such as his dystopian novel The Iron Heel or his non-fiction exposé The People of the Abyss.