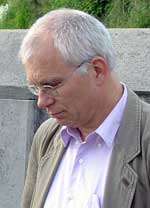 Iztok Osojnik (born 1951 in Ljubljana, Slovenia), poet, fiction writer, essayist, translator, artist, tour director, mountain climber, cultural manager, and festival organizer. His many professions took him all around the world. A hippy, a rock in the opposition musician, a trendsetter in his youth and a co-founder of the prankish movements Garbage art and Sous-realisme is still today a rebel and an independent mind, proceeding along his own paths. Graduated in Comparative Literature from the University of Ljubljana (1977). Postgraduate studies at Osaka Gaidai University (1980-82). From 1999 until October 2004 he was the Director of the International literary festival Vilenica and developed it from a provincial Central European event into one of the major European literary festivals. He also co-founded Equrna gallery in Ljubljana and two other well established literary festivals in Slovenia: Trnovo Tercets (Ljubljana) and Literary Talks in the Villa Herberstein (Velenje). He is an editor of Apokalipsa (Ljubljana) and Tvrđa (Zagreb) reviews, as well as the national editor for the Dutch based international internet poetry magazine www.poetryinternational.org. He co-edited two book presentations of the Slovene literature: Slovenia, a Nation of Writers (with Sunandan Roy Chowdhurry, Sampark, fall 2002, New Delhi) and Unlocking the Aquarium, Contemporary Writing from Slovenia (with Fiona Sampson and Ana Jelnikar, Orient, spring 2004, Oxford Brooks University). So far he published 19 collections of poetry and 4 novels. He also publishes essays on literature, anthropology, and philosophy (The Smile of Mona Lisa, essays, 2004; Homo politicus, Aut, Apokalipsa, 2006). Lately an autobiographical novel The Story of Mr. Pirjevec and Me, Melinda Podgorny (2002) and his major novel The Dark Matter (2005), and five books of poetry Darkness of July (2002), Once upon a time there was America (2003), From the New World (2003) Mister Today (2004) and Poems of Nothingness (2006) were published. He translated (poetry) from Chinese, English, Spanish, Ukrainian and Croatian. His poems were published in English, Chinese, Croatian, Bulgarian, Dutch, French, German, Hungarian, Hebrew, Italian, Lithuanian, Latvian, Finnish, Macedonian, Malay, Polish, Portuguese, Romanian and Russian. Three books of poetry in English: Alluminations (City Gallery of Arts, Ljubljana 2001), a collection of poetry, And Some Things Happen for the First Time (Modry Peter, Canada 2001) and Mister Today (Jacaranda Press, California 2003), and two chap books (Miscellany Poetry, Chattanooga, UT). In March 2005 a collection of his poetry was published in Czech language (V tobe ožiju, Zlin 2005). And another one in Croatian will be published soon (Tetralogija). For his work he was awarded with Jenko (1997 the best book of poetry award), Veronika (1998 – the poetry book of the year), Župančič (1992 – the town of Ljubljana), Italian Friuli Poetry Award (2002), and Hanibal Lucić Laureate 2004 awards. In 2000 he was the fellow of Cambridge Seminar on Contemporary English Writers. And in 2001 he was the fellow of Goethe Institut in Berlin.