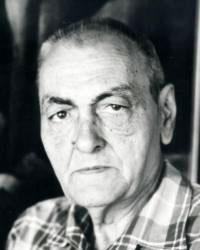 Ivan Kupec (1922-1977) – poet, essayist, translator and editor. During the so-called normalization period he could not publish his own work. His first book of poetry Podľa hviezd meniť masky or Change the Mask according to the Stars (1940) is animated by the principles of surrealist poetics, and the author published it under his original name of Ivan Kunoš (which he changed in 1941). In the collection Nížinami výšinami or Over the Planes, Over the Hills (1945) Kupec departs from surrealist poetics and goes on to simplify his poetic view with a special emphasis on social relations. His poetic collection Mušľa or Seashell (1961) offers poems of love, as of man’s place in the whirlwind of history. The book Vyzliekanie z hnevov or Stripping off Anger (1965) primarily presents the personal negative experiences of the totalitarian period of the 1950s. His other more significant collections include: Hodina s anjelom or Hour with Angels (1968), Tieňohra or Galanty (1988) and Kniha tieňov or Book of Shadows (1990), containing poems from the times in which the author was unable to publish his poems.