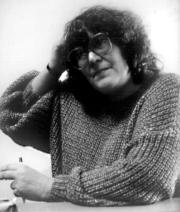 Film critic, essayist. Born 1944 in Gorna Dzumaja, Bulgaria. Education in Skopje and Zagreb. Since 1972 she works as an editor within the Film Board at the Youth Dome in Skopje (today – Youth Cultural Center).
She is one of the founders of the Cinematheque of Macedonia in 1974, were she works as an advisor-filmologist until now, excluding the period from February 1999 to August 2001, when she is assigned as an advisory for film and theater to the Minister of Culture of Republic of Macedonia.
Hers official engagements include: The President of Macedonian Kino-Association (with several mandates), General Secretary of the Former Yugoslavia’s Film Critics Association (1977-1979), then several times she was member of the Advisory Committee for Culture and Art of the Open Society Institute – Macedonia, etc. She’s one of the founders of the Film Camera Festival Manaki Brothers in Bitola. She’s member of the Macedonian Film Critics’ Section and a member of FIPRESCI (International Association of Film Critics).
Noticeable is her work on numerous research projects on the field of film history and theory in Macedonia, as well as her participation at the various scientific symposia related on the film issues. She was one of the very first editors of the film monthly magazine Cinematheque Monthly, and now she’s editor-in-chief of the magazine for film history and theory Kinopis. Her contributions on the encyclopedia editions include: Film encyclopedia – book 1 & 2 (Yugoslavian Lexicography Institute “Miroslav Krlezha”, Zagreb 1986), Macedonian Children Encyclopedia (Detska Radost, Skopje 1990), Macedonian Youth Encyclopedia (Detska Radost, Skopje 1995).
Also, she publishes in the periodicals Film-Focus, Prosvetena Zhena, Vecher, Kulturen Zhivot, Denes, Premin… She had published over 300 articles, studies and critic commentaries… She contributed in various specialized films magazines in France, Austria, Turkey, Russia, Yugoslavia, Croatia, Slovenia, Bulgaria, etc.
Published works: Film Bibliography 1944-1954 (Cinematheque of Macedonia, Skopje 1991) and Filmography of the Macedonian Amateur Film 1935-2000 (Macedonian Kino-Association, Skopje 2000).