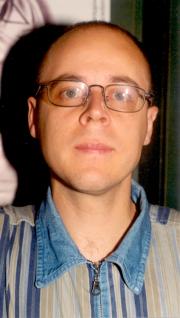 Goran Trenchovski (24.4.1970), director and writer.
Gradueted film and theatre directing at the Academy of Art in Novi Sad. He lived and worked for one year in Prague, Czech republic. He has directed many TV projects of different genres: Chubbies (serial in 8 sequels), Beggars and Placards (documentary), Krecho (docudrama) and Multilevel (feature) for which he won the Grand Prix award at the VI Sarajevo film festival. His second TV feature film GHOUL QUEST is a film which acquaints us with the fate of an authentic assortiment of heroes torn away from the Balkan iconography, picturesquely sculptured and psychologically represented with all their good and bad sides. He also has theatre and radio experience. He directed following stage performances: Sonorous Pictures, Slavic Orpheys, According to Judas’ Gospel, Infernal Machine, Leons and Lena, The Spirit of the Can, From the First Breath, Beggars’ Opera, Endgame; as well as plays from the following playwrighters: Aischilus, Witkacy, Andrejev, Artaud, Ionesco, Pinter, Albee and Arrabal.
He is an author of a book of essays about performing art From Beggar to King (1995), editor of antology of dramaticules Carnival Sighs (1998), monography Steps on the Star Planks (1999) and of translator of Jiri Menzel’s texts Faith and Doubt (2000). Orbis Pictus (2001) is his second book of essays. Charged in Macedonian National Television.