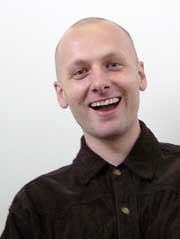 Goce Smilevski. He was educated at the University of Sts. Cyril and Methodius in Skopje (Comparative Literature), at Charles University in Prague (Czech language and Czech Literature), and at the Central European University in Budapest (Gender & Culture Studies). He worked as a shop-assistant in Prague, as a teacher of Macedonian language in Kavadarci, and as an archivist in Skopje. Novels: Planet of the Inexperience, 2000, Conversations with Spinosa, 2002. Awards: Blaže Koneski, essay award for “Incest in The Sound and The Fury by William Faulkner and Man Without Qualities by Robert Musil”; “Sts. Cyril and Methodius,” on the occasion of the tenth anniversary of Skopje University, Novel of the year by Utrinski vesnik for Razgovori so Spinoza (Conversations with Spinoza).