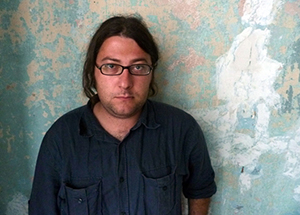 Gjorgje Jovanovik (Skopje, 1980) graduated from the Faculty of Fine Arts in Skopje (2003). He has realized multiple projects that focus on the issues of integration and disintegration of contemporary man. In his works, he re-examines the interhuman relationships in the context of a general state of redefining universal values, the relationships between man and society and consumerism as a key factor in the modern way of life, and politics as a factor of the dissolution of cities, states and families. Another element present is that of self-reference, as well as of re-examining oneself in a narrower and broader context of disintegration of the old and creating new values. He creates installations, performances, objects, videos, collages and paintings in order to achieve a transformation of his artistic and individual expression following the fluidity of the contemporary context.
He has realized several solo exhibitions in Macedonia and abroad. ”The Confession of a Cake Monster”, (Studio Golo brdo, Rovinj, Croatia, 2013), “Fragmented Archive of the Artist from the Country in Transition”, (MC Gallery, New York, 2010), “It’s Complicated”, (Gallery Centrum, Graz, Austria, 2010), “An Off-Day for Mister Euzebio”, Skopje, 2008) “The Walk of Mister Chenk Through the Divided Continent”, (Skopje, 2005) ctr.
He is an author of the following performances: ”The Confession of a Cake Monster” performed in New York, Vienna, Ljubljana, Belgrade, Prishtina, Rovinj and Skopje 2008-2013), “The Recession of the New Year’s Eve” (Skopje, 2008), “The Depression of the New Year’s Eve (Skopje, 2005), “Sales-man of Male Tears” (Skopje, 2006) ctr. He also took part in numerous group exhibitions , symposia, workshops and conferences in Macedonia, Albania, Serbia, Bosnia, Slovenia, Greece, Turkey, Austria, Italy, Netherlands, France, Spain, Belgium, Estonia, Finland, Egypt, USA.

He has participated on several residency programs: 2013 IAAB-Basel ,TICA- Tirana Institute for Contemporary Art, 2012- Cité internationale des Arts, Paris, France, 2011- Watermill Centre, Long Island, New York and Apartment project, Istanbul, Turkey, 2010- ISCP New York and in Graz, Austria as a fellow of the program of the Cultural City Network.
For his practice, he has been awarded with the award for young visual artist “Denes” in 2009 the award for video at the international festival Alternative Film/Video in Belgrade in 2009, special award at the Akto Festival in Bitola, Macedonia in 2012 and the award of the 10 Biennial of Young Artist organized by the Museum of Contemporary Art in Skopje, Macedonia in 2013.