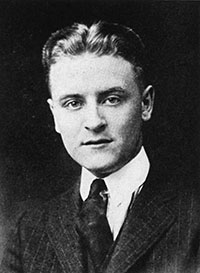 Francis Scott Key Fitzgerald (September 24, 1896 – December 21, 1940) was an American novelist and a poet, member of the so-called Lost Generation of the 1920s. He is widely considered to be one of the greatest American writers of the twentieth century. He was named after his second cousin, who was the author of the American anthem. F. Scott Fitzgerald was married to Zelda Fitzgerald, a fashion icon of the 1920s, who was also a novelist.
He finished four novels: This Side of Paradise (New York: Charles Scribner’s Sons, 1920), The Beautiful and Damned (New York: Scribners, 1922), The Great Gatsby (New York: Scribners, 1925), Tender Is the Night (New York: Scribners, 1934), while his fifth novel, The Love of the Last Tycoon, was published posthumously in 1941. He is also author of many collections of short stories including Flappers and Philosophers (1921) Tales of the Jazz Age (1922) All the Sad Young Men (1926).
The short story Bernice Bobs Her Hair was first published in Saturday Evening Post in 1920, and shortly after in his collection of short stories Flappers and Philosophers (1921). The story was based on letters Fitzgerald sent to his younger sister, Annabel, advising her on how to be more attractive to young men. The original text was much longer, but Fitzgerald cut nearly 3000 words and changed the ending to make the story more attractive to publishers. An interesting fact about this work is that Fitzgerald met his wife Zelda in a country club similar to the one described in Bernice Bobs Her Hair.