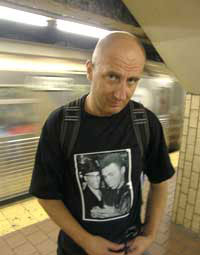 Esad Babačić was born on 21st. of July 1965 at 5:45 a.m. in Ljubljana.
At the beginning, he was writing texts for a punk group named VIA OFENZIVA, whose front man and singer he was. Soon, one eminent Slovenian poet defined his work as a “real poetry”.
In 1984 he had to go to Titograd, Montenegro, to serve in the former Yugoslav Army for 13 months. After Yugoslavia’s downfall Esad lost his will to finish studies of Croatian and Slovene languages. Besides writing poetry he was working as a journalist on national TV.
His record also reveals that he once read his poetry with John Ashberry on a literary evening in Berlin. He has received “Kultursalon Hörbiger Literary Award” of Austria for his poem “The Danube”.
Collections of poetry: Kavala (1986), Malemu boksarju (To a Small Boxer, 1988), Angel s scufanimi krili (Angel with Worn-Out Wings, 1989), The Lying Poet (1990), Veter v žilah (Wind in Veins, 1994), Black Jack (1994), Kiti se ne napihujejo (Whales Don’t Boast, 2000), Divan (2006), Biospective (new and selected poems, with pictures by Roman Uranjek, 2008).