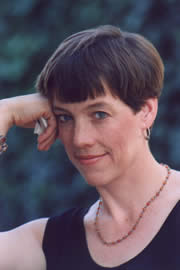 Erica Johnson Debeljak was born and raised in San Francisco, California. In 1980, she moved to New York City where she studied French Literature at Columbia University and then went on to get an MBA from New York University. She worked as a banker for five years before moving to the capital of the newly independent Slovenia to marry a poet. She settled in Ljubljana, the capital of Slovenia, studied the language and launched a career in her new home as a translator from Slovenian into English and as a popular essayist and columnist.

Ms. Debeljak has published two books in Slovenia. In 1999, she published a book of essays called “Tujka v hiši domačinov” (Foreigner in the House of Natives), and, in 2004, an exploration into the life of the Slovenian poet, Srečko Kosovel, called “Pesnik in jaz” (The Poet and I). Ms. Debeljaks’s translation of the selected work of Dane Zajc (“Barren Harvest”) came out in 2004 with White Pine Press. She contributes regularly to Slovenian literary journals, newspapers, popular magazines and other publications. Her work has been published in the United States, most recently in “The Literary Review” and “Common Knowledge.” Her essay “The World’s Skin” was named among the notable essays of 2004 in the Best American Essay anthology edited by Robert Atwan and Louis Menand. Her work has also appeared in Italy, Bosnia & Herzegovina, Macedonia, Croatia, Finland and Hungary. The author lives in Ljubljana with her husband and three children.