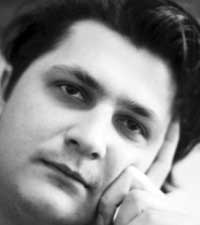 Dušan Čater was born in 1968 in Celje. He studied journalism and sociology at the University of Ljubljana and worked as an editor for the Karantanija publishing house and as a columnist for several magazines. Since 1995, he has been a free-lance writer. His literary works have been published in all major Slovenian literary magazines. Books: Flash Royal (1994; last year published also in Croatia), Imitacija (1996), Resnični umori (1997), Patosi (1999), Ata je spet pijan (2002). Furthermore, he has published several books for children and monographs on Marilyn Monroe, Madonna and Giacomo Casanova. Dušan Čater ranks among the most recognizable and ambitious young Slovenian writers. His novel Ata je spet pijan is further proof of this fact: the book has already been translated into Croatian and Serbian.