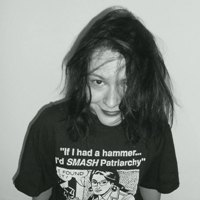 Dijala Hasanbegović is a journalist, poet and literary critic. She worked for Dani weekly as a literary and theatre critic and editor of Radio Sarajevo portal. She published essays, poetry and criticism for various literary magazines. Her poems have been translated into English, Polish and Norwegian; the first English translation was published in The American Poetry Review (September, 2007). She lives in Sarajevo. At the moment she writes columns for Diskriminacija.ba portal, dedicated to fighting social, labour, gender and other discrimination in the country and the region.