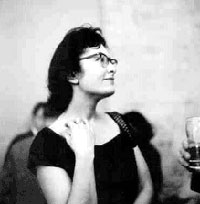 Denise Levertov (1923-1997), one of the twentieth-century’s foremost American poets, was born in Ilford, Essex, England, in 1923. Her father, Paul Levertoff, was a Russian Jewish scholar who converted and later became an Anglican priest. He wrote throughout his life about connections between Judaism and Christianity and welcomed Jews at liturgies at St. George’s, Bloomsbury, and helped Jewish refugees in London during World War II. Beatrice Spooner-Jones Levertoff, the poet’s mother, was raised a Congregationalist and was, like her husband, involved with political and human rights issues. She canvassed on behalf of the League of Nations Union and supported the rights of German and Austrian refugees from 1933 onward.
Denise Levertov was privately educated and served as a nurse in London during World War II. She emigrated to America in 1948 after she married Mitchell Goodman. They had one son Nikolai Goodman who is an artist and writer.
Levertov lived in Somerville, Massachusetts, for a number of years while teaching at Brandeis, MIT, and Tufts. She moved to Seattle in 1989 and settled close to Lake Washington in the shadow of Mt. Rainier. She taught part-time at the University of Washington and continued as a full professor at Stanford University for the first quarter of each year as she had been doing since 1982. After her retirement from Stanford in 1993, she did several benefits and poetry readings a year in both the United States and Europe. She died in 1997.
Levertov has published some fifteen volumes of poetry, including the broadly representative Selected Poems (1986) and Breathing the Water (1987, 1988). Her prose is gathered in The Poet in the World (1973) and Light Up the Cave (1981).