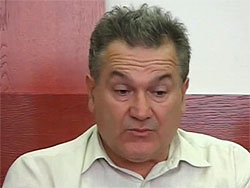 poet, prose writer, publicist. Born 1960, in Skopje. Studied at the Faculty of Philology in Skopje. Editor of the first independent daily newspaper in R.Macedonija “Republika”. One of the founders of the weekly magazine “Delo”. Was a member of the Macedonian Writers’ Association and a member of the Independent writers of Macedonia Association. President of the Struga Poetry Evenings Festival since 1999. Currently works as a director of the publishing house “Nase Delo”.
Author of the following books of poetry: Fingers in the clouds (1987), Bulls in my blood curculation (1989), Dangerous paper (1991), The angel and the thirsty muse (1994), Demonika (1997).
Also author of the book of essays The line of the red heat (2000).
Has been included in anthologies of Macedonian poetry, and some of his works have been translated into many world languages.
Awards include: “Studentski zbor”, “Mlad borec” and the State Award for best book of socio-political comments (2000).