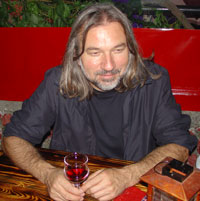 Branko Čegec, poet, essayist, critic, born on 22 June 1957, in Kraljev Vrh. He graduated Yugoslav language and literature and Comparative literature from the Faculty of Philosophy, University of Zagreb. He was editor of literature in the youth newspaper and magazines Polet and Pitanja. He was the editor-in-chief of the journals Quorum and Oko. He founded his own publishing house Meandar in 1992, which has operated since summer 1993. First he worked as director and chief editor of Meandar; now he is the chief editor of all editions. In 1999 he was elected president of the Board of Goranovo proljeće, the largest Croatian poetry event in where he worked until late 2007. In 2002 he founded The Croatian Book Centre and in 2003 the magazine Tema: where he works as a director and editor-in-chief.
He was awarded Goran for young poets in 1980, 7 sekretara SKOJ-a prize in 1983, Kočićevo pero prize in 2007 and Kvirin prize in 2008.
His poetry has been translated into French, Slovenian, German, English, Italian, Hungarian, Polish, Lithuanian, Macedonian.