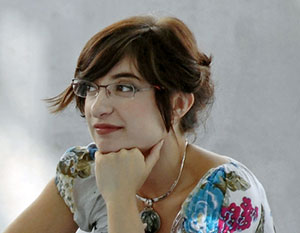 Aurélia Lassaque (b. 1983) is an Occitan and French poet. Fascinated by the connections between poetry and the plastic arts, she has collaborated creatively with various painters and visual artists (for exhibitions in France, Italy and America). Her poems have been translated into English, Italian, Asturian, Basque, Brazilian, Catalan, Spanish and Finnish for numerous journals and anthologies. In 2011, Aurélia Lassaque organised for the Council of Europe the exhibition “Dialogue entre cultures et langues”. She is also a book reviewer for regional television (FR3 sud) and is currently completing her doctorate on Occitan baroque drama.
She has been published collections and artist’s book in Occitan and French. Her last collection, Solstice and Other poems, is published in England in June 2012.