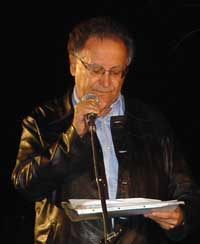 Asher Reich was born in Jerusalem, 1937.
Recognition came early, in 1961, when he won the Anne Frank Award from the America-Israel Cultural Foundation. His first pub¬lished volume of poetry, On the Seventh Year of My Wanderings (1962), marked his arrival as a contemporary Hebrew/Israeli poet. His second volume, A Nocturnal Sunrise (1969), won a distinguished prize from the Israeli Association of Artists, Composers, and Writ¬ers. More volumes of poetry followed: The State of Affairs (1975), A Reference (1978), Women’s Tractate (1980), A New Packet (1983), Table of Contents (1983; awarded the Bernstein Prize of the Federation of Israeli Publishers), Works on Paper (1988), Fictional Facts (1993), Winter Music (1996), The Face of Earth (1999), and Lifeless Future (2003). Other awards include the Israeli Prime Minister Prize for Poetry (1989), a DAAD (German Academic Exchange Service) scholarship in Berlin (1990), Tel Aviv Award for poetry (1992), and Israel’s President Prize (2000). In 1999, Reich was elected to the Ger¬man Academy of Poetry and Languages. And in 2000 he was given the Poetry Prize by the city of Basel, Switzerland.
Reich’s poetry has been translated into twenty languages. Tou¬louse Press published a volume of his poetry in French in 1980. Works on Paper was published in German (Arbeit auf Papier) in 1992, and Winter Music is forthcoming in German, both by Rowhot Press. Reich’s novel, Memoirs of an Amnesiac, is currently in press in Ger¬man translation by Bleicher Publishing House.
Reich also writes prose fiction. His novel, Memoirs of an Amnesiac, was published in 1997, and his volume of short stories, A Man with a Door, is currently in press. He was editor-in-chief of Moznayim, a monthly literary periodical of the Israeli Association of Writers. He has taught creative writing in various academic institutions, includ¬ing Ben Gurion University in Beer Sheva. He lives in Israel.