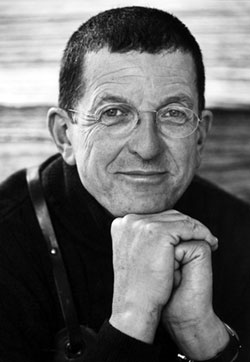 In a career spanning nearly 40 years, Antony Gormley has made sculpture that explores the relation of the human body to space at large, explicitly in large-scale installations like ANOTHER PLACE, DOMAIN FIELD and INSIDE AUSTRALIA and implicitly in works such as CLEARING, BREATHING ROOM and BLIND LIGHT, where the work becomes a frame through which the viewer becomes the viewed. By using his own existence as a test ground, Gormley’s work transforms a site of subjective experience into one of collective projection. Increasingly, the artist has taken his practice beyond the gallery, engaging the public in active participation, as in CLAY AND THE COLLECTIVE BODY (Helsinki) and the acclaimed ONE & OTHER commission in London’s Trafalgar Square.
Gormley’s work has been widely exhibited throughout the UK with solo shows at the Whitechapel, Serpentine, Tate, Hayward Gallery, British Museum and White Cube. His work has been exhibited internationally in one-man shows at museums including Louisiana Museum of Modern Art (Denmark), Malmö Konsthall (Sweden), Kunsthalle zu Kiel (Germany), National Museum of Modern Chinese History (Beijing), Antiguo Colegio de San Ildefonso (Mexico City), Kunsthaus Bregenz (Austria) and State Hermitage Museum (St Petersburg). Gormley has also participated in group shows at the Museum of Modern Art (New York), the Los Angeles County Museum of Art, the Venice Biennale and Documenta 8 (Kassel, Germany). Major public works include ANGEL OF THE NORTH (Gateshead), ANOTHER PLACE (Crosby Beach, Liverpool) and HABITAT (Anchorage, USA).
Gormley was awarded the Turner Prize in 1994, the South Bank Prize for Visual Art in 1999 and the Bernhard Heiliger Award for Sculpture in 2007. In 1997 he was made an Officer of the British Empire (OBE). He is an Honorary Fellow of the Royal Institute of British Architects, an honorary doctor of the University of Cambridge and fellow of Trinity and Jesus College, Cambridge. Gormley has been a Royal Academician since 2003 and a British Museum Trustee since 2007.
Antony Gormley was born in London in 1950.
http://www.antonygormley.com/